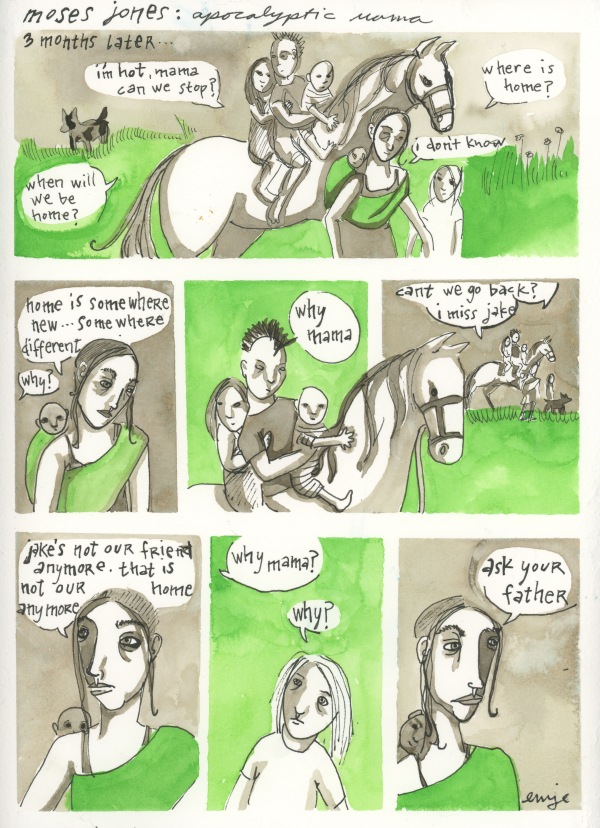 so i totally wrote a big long thing in my journal about my ending of moses jones: apocalyptic mama…but i forgot to bring my journal to the library (i do not have internet at home.)

i will, as most things in life, wing it….

i started moses jones when i was living in a 30 person cooperative house with my ex-husband & our three children (fourth on the way.) my life was in turmoil as i was about one bad behavior from being kicked out of the co-op. said bad behaviors were in reaction to my ex-husband having relations with other women in our house all while we had an on-again/off-again relationship.
i was losing my mind.
i was also pursing an art degree at uw madison where i was lucky enough to have an instructor who encouraged me to pursue my own style of art & not to worry if it was popular or not.
if you have read my book confusion perfume & other neurotic comics, you know that moses started out as a transformation of my confusion perfume heroine, berny. however, moses quickly became her own woman. a zombie fighting mama. i did not intend for her to be so bitter & humorless, but much like the portrait of dorian gray, she kinda took that on for me i suppose.
as i worked on my final project for my art class, the beginnings of moses jones, my ex-husband noticed that he was missing from the story. we must have been in an on-again stage because i did try to write him in once i started doing pages for the comic. however, like moses, he did not turn out the way i thought he would…& dusty knickers was born. the absent father.
which pissed off my ex-husband. he will now deny that character is based on him.
i have worked on this comic on and off for nine years. it has grown up with the youngest of my children. i did not get the story out the way i planned. the story took its own path. there is a lot i would do different. there is a lot of unfinished i think i should finish…
yet somehow, the story is done.
i need to let it go.
i cried after i finished this page.
moses jones has been a sort of friend for these past nine years. someone i could turn to who i knew would not hesitate to put dusty knickers in the ground.
but i need to move forward now. past this story and on to a new one. 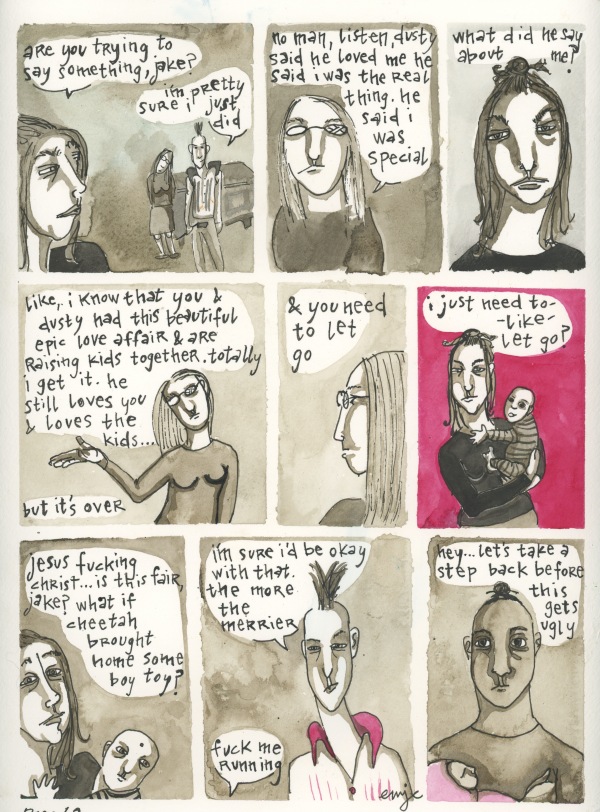 the ongoing saga of a dystopian zombie fighting mama & her issues….

another page of moses jones: apocalyptic mama.
i have been working on this comic on & off since 2013 when i was in madison, wisconsin, attending university & living in a housing co-op.
my relationship with my ex. my children. and my experiences in a housing co-op have all heavily influenced this comic.
as well as my early exposure to apocalyptic dystopian themes in movies.

one day i hope to publish a collection of these.
one day. 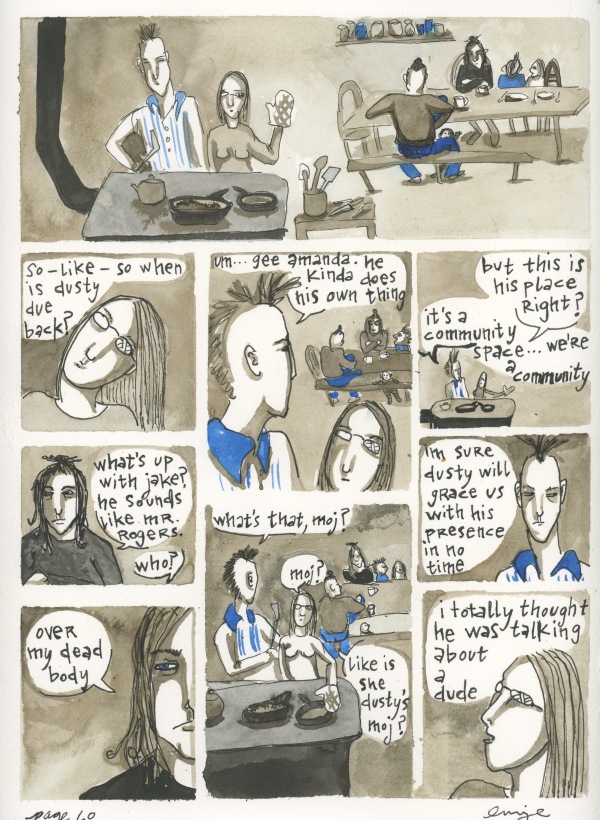 here is the on-going saga of a humorless zombie-fighting mama in some dystopian future.

this is the first page of a new episode of moses jones. for previous pages, check out my moses jones page.
i’m not sure what happens next, but i guess i will find out.

do you ever wonder
what it’s like to be
lovable
to feel
desired
do you ever wonder
if someone will maybe
someday
look at you
like that
or are you trapped
forever
some bitch
who just
doesn’t
give a fuck
anyway.

i watched brief interviews with hideous men, and it left me very conflicted. i am a lifelong feminist even though i didn’t even know what a feminist was until i was twenty-two. i have had a history of disastrous relationships and am admittedly a very dominant female.
i wonder. should women be soft & vulnerable so men can feel important? and then i’m all like, fuck that…. but part of me kinda yearns for a protector & bread winner. & then i get mad at myself…& then i say, but why not? why can’t i be a romantic & a bad ass?
and, of course, still be a feminist… i mean, anyone can be a feminist if you believe women are just as important as men. no matter if you are a stay-at-home or a conquer-the-world (or both in my case…ha!)
i don’t know.
just wondering stuff. out loud. here.

so i am trying to streamline my site. i am down to four pages. AND i updated my mojo page with episode three. so for those of you who have been waiting with bated breath….
those of you waiting for episode four…hmmm. i’m not sure…but when i do get to working on it, i will be posting new pages here as i shut down my patreon site. 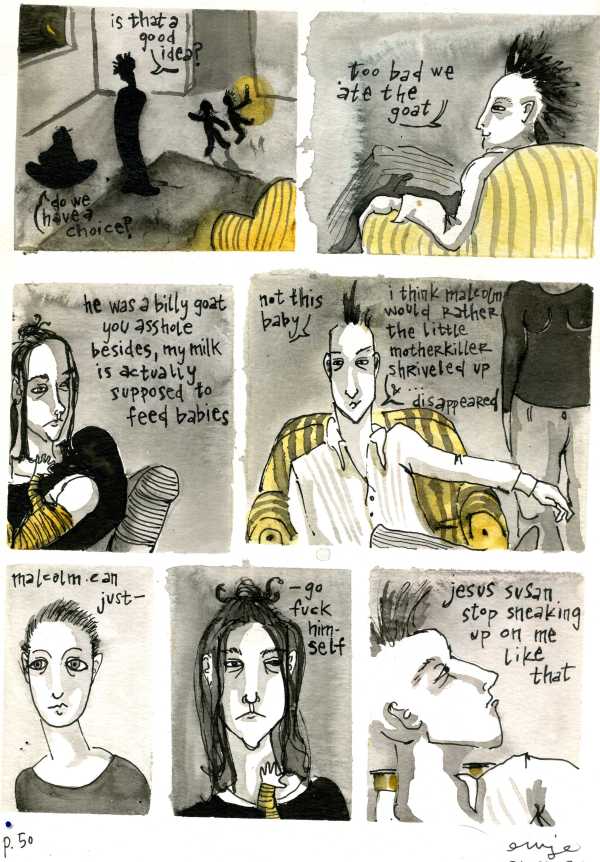 in accepting that i am awesome, i have to highly recommend my awesome, hand drawn, experimental comic for you to read. 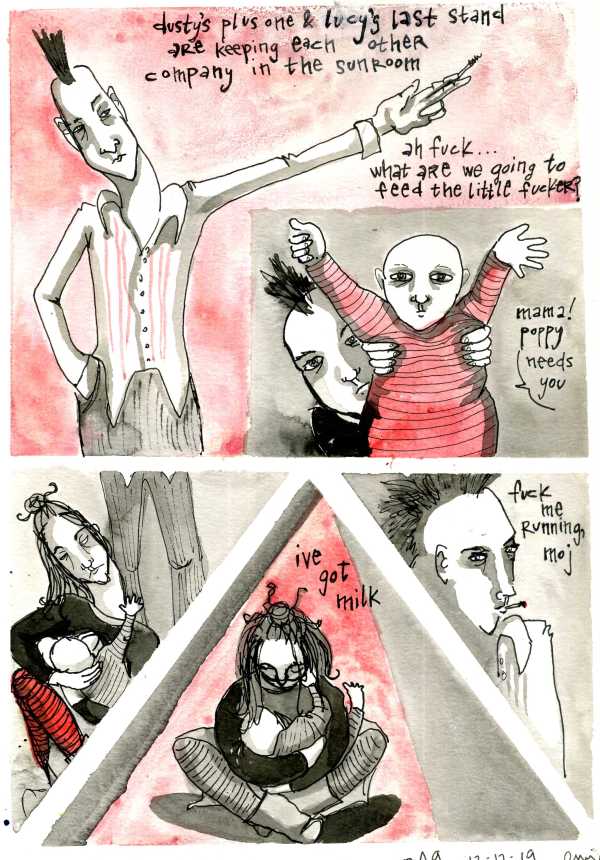 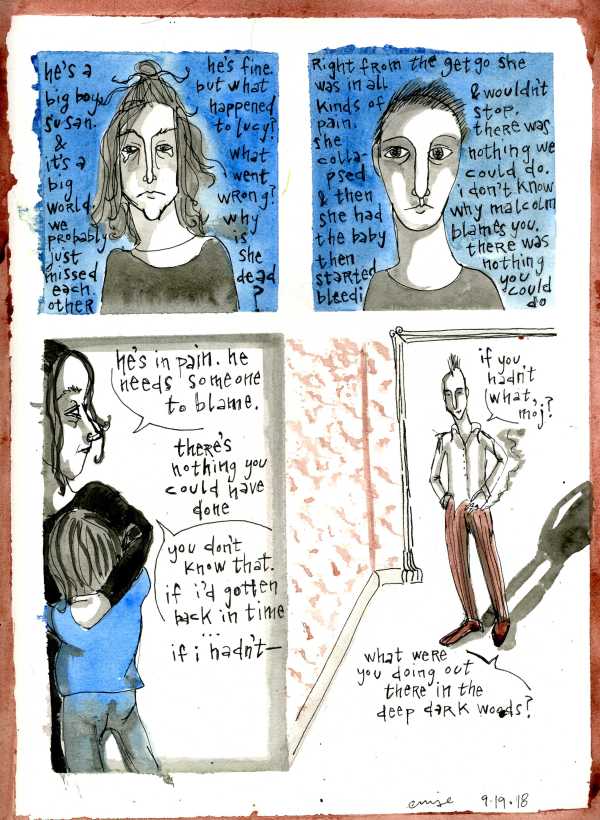 the continuing saga of a zombie fighting mama