i’m so far
out of whack
i am the letter “i”
but i look
like a “z”
i am so twisted
i don’t even want
to do the little things
that unwind me
do
the little things
that keep me
going
recovery from this mood
seems
impossible
seems
unreachable
when each morning
i wake up
thinking
“today i will get it
together”
but ultimately
i spend the day
just trying not to
fall apart
all over again.

i am thinking this is part of the journey more than a bump in the road. like i have to rest right now. maybe i keep hurting myself because i won’t stop trying to go too fast & too far.
so i’m resting.
just
resting.

this one didn’t really turn out
or did it?
i feel this way sometimes
ugly
hidden
falling apart
i sincerely have spent my life
feeling like
a mistake
a monster
a misfit
but then i look at my children
& i wonder
how ugly can i be
if i have made
such beautiful babies?

when i look in the mirror, sometimes i see a beautiful person & think i’m the bee’s knees…but still i consider myself one of the ugly ones because of how i am seemingly received by the general public. it’s like my art & writings. i love them…but often it feels as if no one else does.
& sometimes it just feels like everything i do is ugly.
except for my kids. they’re beautiful.

i have been in the blahs
trying to figure it all out
has me worn
out
plus i think i just broke my baby toe…
why is the universe
so set
on hobbling me?
or is it my own wish
to keep
my own mortality
so close in mind?
whatever is going on
it sucks
i just want to fucking walk

the day after i realized i have almost no limp left from my broken knee, i kicked a wooden box of blocks as i walked through the playroom on my way to the bathroom at 5am one morning.
fuck me running
or rather
fuck me sitting because i can’t run anymore…will i ever run again? is this what getting old(er) feels like? losing what we once took for granted?
sigh.
it was actually the second injury to that poor baby toe. last week i kicked a stack of wooden boards while in my kitchen (random stacks of wooden boards are hopefully a temporary decorating habit of mine & will one day be used to build things, but until then, they remain tripping hazards….)
i thought i had broken it then…but a few days later it felt fine. so then i kicked something else with it & now it is black & blue & refusing to bend.
crap.
crap crap crap.
yet still i try to negotiate treaties with my monsters & build bridges with my demons…just not very enthusiastically right now.

the drawing up top is another play around with oil pastels & inks. maybe if i can get oil pastels & inks on the same page, i can unite the powers that are inside of me & bring an end to the civil war within?
the title is a reference from a movie i watched a lot as a kid, finian’s rainbow.

quiet
i’m listening
to the deep inside of me
there’s a message
to me
from me
i just know it
a lesson not quite
learned
some gentle
inspiration
combing the fur of my monsters
collecting the eggs
of my demons
encouraging a cooperation
within
me
a new day of…
no, not hope
but faith
faith that i can learn
to calm the storms
while also
celebrating
the wildness
of my stormy
self.

i woke up and watched the eclipse the morning i wrote this page. it was magical.
otherwise, i have been in kind of “pause” mode for the past few days…weeks…. this is an overwhelming time of year. i think i just have to sit & listen. it’s pretty much all i can do right now.
but it is an important part of healing (& creativity)….

sometimes the inks just aren’t messy enough. i have been playing with pastels and having a lot of fun. i am not sure where i’m going, but i am really liking some of the results.

the mother & child is a mix of ink & pastels. also i used ink in the skies of the horse drawings. 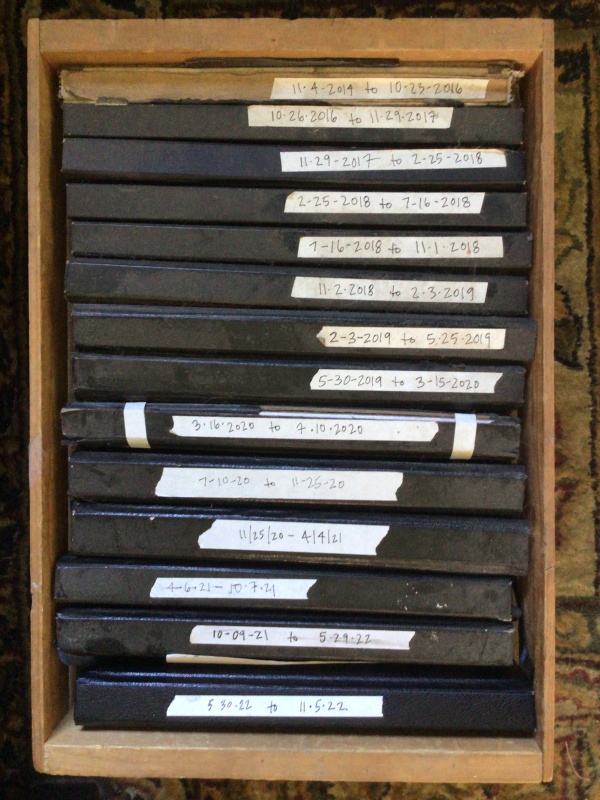 i just finished journal number 14 and am cracking open journal 15.

when i lived in a housing co-op, years ago, i found an 8X11 art journal in the free store. i took it and started using it in an art class i was taking at uw.
then in 2016, i did inktober for the first time and got in the habit of inking daily.
now i have a crate full of words & images that have spilled out of me. explorations of all the shadows inside me.
art journaling is now a total way of life.

i can be strong
& also be gentle
i can be scary & intense
while being
loving & accepting
i can be ferocious
while i am
kind & generous
both
all
exist in me
all kinds of me
ready
to sign a truce
to throw a party
& everyone
is
invited.

more journaling on my recent epiphany where i realized i am not all that bad.
that i can find balance in who i am.

watch as my yin
tries to reconnect
with my yang
look
my masculine
& my feminine
are sending each other
love notes
& my angels
are dancing with
my demons…
this may seem to be
an ending
but it is just
the beginning.

the dark parts and the light parts of me are learning. they are finding each other after a very long game of hide & go seek.

the demons
monsters
& sirens
were called forth
to protect
that soft & gentle
part of me
called forth
to keep my loving heart
safe
walls built
to keep said heart
safe
until a time came
when i forgot
all about
my gentle heart
& only saw
the thorny walls
& snapping beasts
who protected her.

those out grown defenses. one day i will write a comic about it. those dysfunctional super powers that we abused adult children are afraid to let go of.
watch me turn into a monster to keep my own heart safe.
yup.
time to find a new job for those monsters….